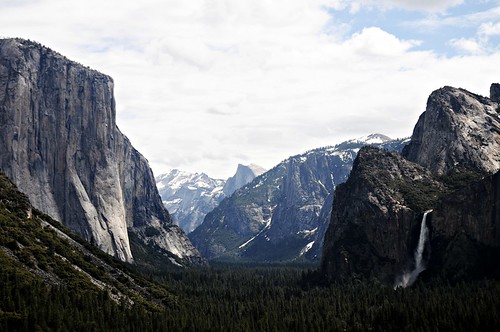 Yosemite National Park spreading over 3000 Sqare KMs in Eastern California is one of the most shining examples of Nature Conservation. Though Yosemite was not the first reserve to be declared as National Park, it is, argubly, the most successful example of National Park Management and Conservation. This is the classic shot of the Yosemite Valley showing the sheer cliff formation of El Capitan Rock (3000 feet vertical rock formation) on the left, the valley in the centre and the Bridalveil water falls (617 feet) on the right and the Half Dome (4700 feet) in the distant background. Unfortunately, the sky was not very spectacular on the day I visited, but the bright sun and good company made the trip memorable.
More about Yosemite here: http://en.wikipedia.org/wiki/Yosemite_National_Park