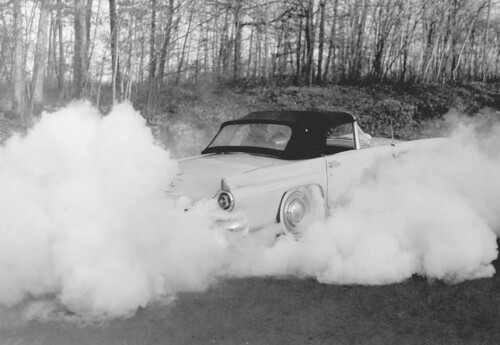 This photo created a national uproar when it was published in HOT ROD magazine, June of 1958. Serious disturbance of the Hot Rod oriented troops, back then.
The photo came about in the fall of 1957. I had installed a Ford-O-Matic transmission, so that my wife at the time could drive the car more easily. A characteristic of this was that you could torque the motor up against the brakes, and the right rear tire would break loose. You could hold forward movement of the car with the brake, and the tire would spin, and burn. I quickly did this in a friend’s driveway. He was amazed, and wanted to see more. I took it out to the street.
Might as well do it up real good. The Ziess camera came out, and I told Wayne to wait until there was plenty of smoke.! That he did, and great results. I stayed on it, for quite a while. The smoke was so wicked, that I had to wait until it cleared to return.

A ridiculous spoof letter about burning rubber was sent with the photo to Rod & Custom magazine. Only it got published in Hot Rod, instead. It was an outrage, a national disgrace and uproar.
I could detail all of this further, but it was, and still is, well remembered.
Read the letter in a comment, below.