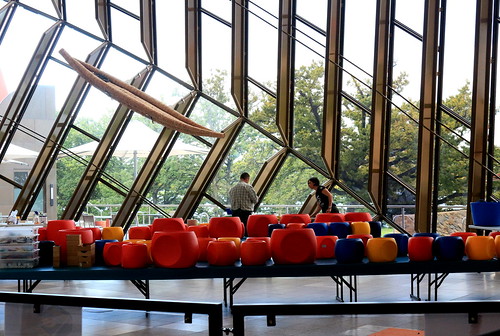 The National Museum of Australia was formally established by the National Museum of Australia Act 1980.
The National Museum preserves and interprets Australia’s social history, exploring the key issues, people and events that have shaped the nation..
The Museum did not have a permanent home until 11 March 2001, when a purpose-built museum building was officially opened in the national capital Canberra..
The Museum profiles 50,000 years of Indigenous heritage, settlement since 1788 and key events including Federation and the Sydney 2000 Olympics. The Museum holds the world’s largest collection of Aboriginal bark paintings and stone tools, the heart of champion racehorse Phar Lap and the Holden prototype No. 1 car..
The Museum also develops and travels exhibitions on subjects ranging from bushrangers to surf lifesaving. The National Museum of Australia Press publishes a wide range of books, catalogues and journals. The Museum’s Research Centre takes a cross-disciplinary approach to history, ensuring the museum is a lively forum for ideas and debate about Australia’s past, present and future..
The Museum’s innovative use of new technologies has been central to its growing international reputation in outreach programming, particularly with regional communities. From 2003 to 2008, the Museum hosted Talkback Classroom, a student political forum..
The Museum is located on Acton Peninsula in the suburb of Acton, next to the Australian National University. The peninsula on Lake Burley Griffin was previously the home of the Royal Canberra Hospital, which was demolished in tragic circumstances on 13 July 1997. (Wikepedia)

Posted by Lesley A Butler