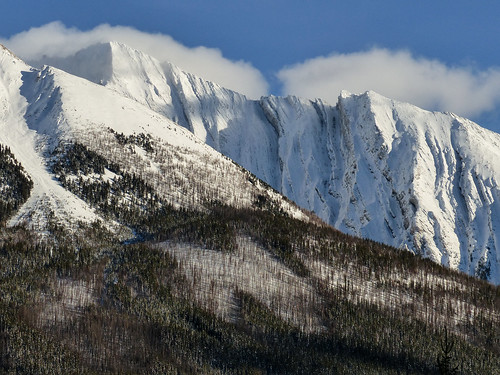 This winter scene was taken on a day trip to the mountains with friends, Cathy and Terry, on 7 December 2014. We drove the area of Highway 40 that is still open (the rest of this highway is closed during the winter months) and also the Smith-Dorrien/Spray Lakes Trail. This gravel road, south of Canmore, travels through the heart of the scenic Smith-Dorrien Valley, which is one of the wildest areas in Kananaskis. Can’t remember if this was one of the many drive-by shots I took that day.

It was a day of mixed cloud and bright sunshine, resulting in rather spectacular light at times. The scenery was incredibly beautiful. There had been a recent snowfall and the trees in many places were still covered in snow, which turned everywhere into a winter wonderland. There was no wind and the temperatures hovered a few degrees around 0C. At times, very dark clouds made a great contrast to the gleaming white snow.

As well as mountain scenery, we were also lucky enough to find two Moose to watch and photograph. A female who was busy licking salt off cars, and a youngish male at a different location. Both animals were absolutely huge!