Amboseli National Park was a wonderful destination and my wife and I spent several days there photographing the abundant wildlife. Although we caught brief glimpses of Mount Kilimanjaro though the cloud cover, it wasn’t until there was substantial cloud clearing that I thought to try to take a panorama of the imposing mountain.

Kilimanjaro is the fourth most topographically prominent peak on Earth. It is part of Kilimanjaro National Park and is a major climbing destination. Because of its shrinking glaciers and ice fields, which are projected to disappear between 2030 and 2050, it has been the subject of many scientific studies.

Glaciers:
Kilimanjaro’s glaciers retreat in 1912–2018.
Kibo’s diminishing ice cap exists because Kilimanjaro is a little-dissected, massive mountain that rises above the snow line. The cap is divergent and at the edges splits into individual glaciers. The central portion of the ice cap is interrupted by the presence of the Kibo crater. The summit glaciers and ice fields do not display significant horizontal movements because their low thickness precludes major deformation. 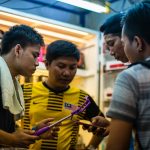 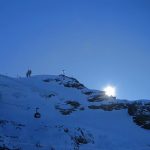