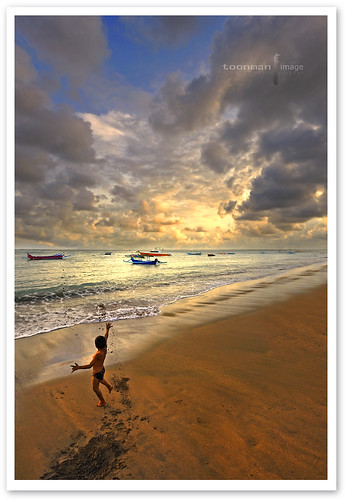 Kuta Beach is a beach located in Kuta. The beach has been notable since early 1970s. Kuta beach is also known as Sunset Beach, as opposed to the Sunrise Beach, another name for Sanur Beach. Luxury resorts, restaurants, and clubs are located along the beach

In 2011, a two-meter white sandstone fence, built in a Balinese architecture style, was built along the road to block the sand from blowing to the cafes and restaurants. The project costed Rp.4 billion ($0.47 million). Some tourists dislike it as it is considered blocking the beach view, while some others believe the wall help dampens the sounds from the congested traffic street. To make the beach cleaner, as of late August 2011, the vendors are prohibited to sell food at the Kuta Beach, but they are still allowed to sell beverages and souvenirs.

From Wikipedia, the free encyclopedia