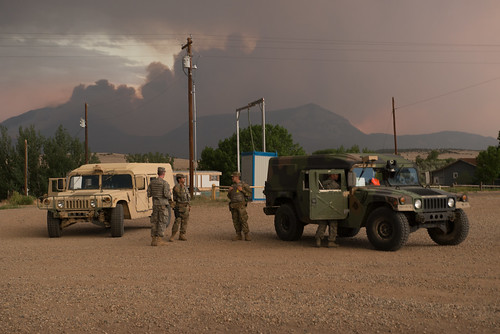 Colorado National Guard members provide roving security patrols, to assist with the enforcement of road closures July 4, 2018, through Huerfano County, in support of the sheriff, to safeguard travelers and to protect the homes in the evacuated areas. The team arrived and began operations July 2. Other teams support traffic control points through the evacuated communities.

The CONG has been providing an aviation search and rescue standby capability in support of the Rocky Mountain Area Coordination Center since July 1. The High-Altitude Army National Guard Aviation Training Site facility in Gypsum, Colorado, is supporting the mission which is rapid response to aviation search and rescue missions, primarily for firefighter safety, in support of multiple wildfire responses throughout Colorado.