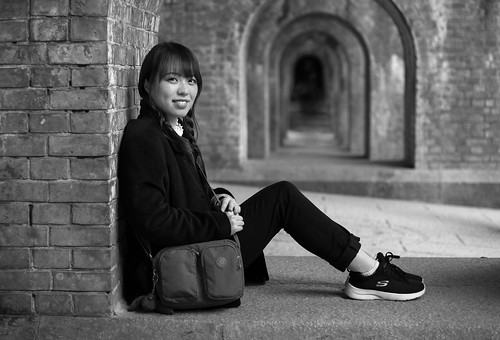 Miku was traveling in a group of 5 friends when I met her at Nanzenji Temple in Kyoto. They were a lively bunch and were having difficulty taking a selfie of the whole group so I offered to help out.

They had traveled all the way from Akita, where apparently it was still cold and snowy. They were excited to be in the Kansai area and enjoying the moderately warm weather. I told them about the strangers project I was doing and asked anyone would be interested in taking part. Initially they were a little shy but Miku volunteered. She had a slightly mischievous character and seemed to be the joker of the group – she was certainly the most talkative. The other girls thought it was hilarious that she was being asked to model. She told me that she was just and ordinary girl and felt she was nothing special.

It was bright sunlight so I moved her into the shade under the old viaduct, and had her sit against the wall. I thought the viaduct would add a bit of visual interest. Looking back it might have been better to place her centrally facing forward and use the arches as a frame. I should also have asked her to take off the bag, We had to wait a short while for the background to clear of people. I shot at f2.5 because she was sitting side on – it could still have been a little higher I think. I decided to edit this in monochrome to accentuate the lines and curves, plus her bag was a distracting strong red colour.

I would disagree with Miku, I thought she was special. I particularly liked her bright character and cute smile – and of course those dimples. Thanks for taking part.

This picture is my eighteenth submission in the 100 strangers project. Find out more about the project and see pictures taken by other photographers at 100 Strangers Flickr Group page www.flickr.com/groups/100strangers/

This is also my eighteenth submission to the Human Family Group, which can be found here: www.flickr.com/groups/thehumanfamily/

Posted by Japan Though My Eyes 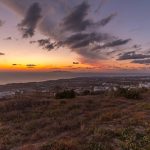 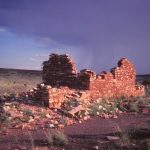